Lard is a four-letter word at Whole Foods. After I ordered the pork shoulder for the carnitas, I asked the butcher if he happened to have any lard hanging out in the shop. He didn’t, but there might be industrially rendered lard on the baking aisle? I trailed behind him through dry goods where he found a girl restocking gluten-free flours. The helpful butcher asked her – “Do we carry lard?” She blinked at him twice like he’s the big jokester then squinted past him at me – and I’m looking at her expectantly – but she screwed her mouth into an awful shape. “No.” As if anyone living in 21st century Boston could be that uneducated. The butcher shrugged and suggested the Asian market down the street. The stocker gave me another sneering peripheral glance as I left the store empty-handed.

But really! Lard is not that bad. Let’s talk about it.

I didn’t have time to head up to Super 88, the Asian mart, so I ended up rendering my own lard from the excess fat I had the butcher leave on the shoulder cut. And anyway, I didn’t want that industrially rendered lard because, as a rule, I don’t trust animal products that don’t spoil at room temperature. The lard sitting in a tub in your pantry (oh excuse me, not your pantry specifically) that looks like shortening doesn’t go rancid because some factory bleached it, deodorized it and hydrogenated it. This overly-processed chemical junk is not what I want.

What I want is the freshly rendered lard that turns out to have less saturated fat and more unsaturated fat than an equal amount of butter by weight. Also, while butter contains 22% cholesterol, lard contains only 10%. Yes you heard me right. Do you ever eat butter on your toasted bagel? Well, lard would be healthier. The other thing? It takes less lard than butter to saute food since the butter burns at a lower temperature requiring more to be added. Understand me: I’m not telling you to replace your olive oil with lard, all I’m saying is that if you eat butter you shouldn’t be afraid of lard [ahem, Whole Foods].

Another way to put this: It’s kind of like the thought of kissing when you’re seven years old. It sounded disgusting then, but eventually you came around. 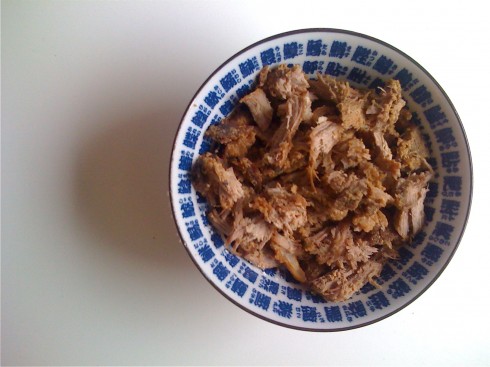 So – what did I make with my unpopular lard? Carnitas. In Spanish, little pieces of meat. There are different traditional recipes wherever you go in Mexico – the most popular one is estilo michoacana which very gently simmers chunks of pork in its own fat until it’s crispy on the outside and tender on the inside. The pork is pulled apart and served in tacos, on tortas, on tostadas, in a million ways. Before you knock this, think about duck confit, the French classic which uses the same technique: meat simmered in its own fat. It is a delicacy and a treat for sure, but it is not shockingly unhealthy like, say, the quadruple-bypass burger at Heart Attack Grill.

The carnitas here are from the state of Mexico – pork seared in a bit of lard then braised in milk with oranges. They’re delicious every way. I tucked leftovers into quesadillas which I ate with spoonfuls of hot habanero salsa and dabs of crema. The perfect lunch.

Heat a skillet or griddle over a medium flame. Place one tortilla on the hot pan. Layer 2 tablespoons Monterrey Jack, 2 tablespoons carnitas, 1 tablespoon queso fresco, then a little more Monterrey Jack. Put another tortilla on top and press down with your fingers to help the melting cheese stick to the top tortilla. When the bottom tortilla is speckled golden, after about 5 minutes, flip the quesadilla over with a spatula. Cook for 5 more minutes or until the other side has crisped up as well. Repeat with remaining five. As you make them, keep the quesadillas warm on a plate in a 200F oven. Serve immediately with crema and salsa on the side. 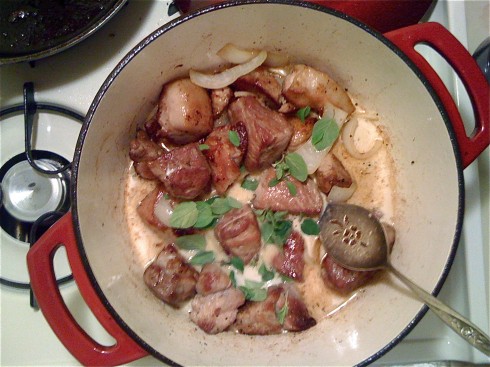 Carnitas
adapted from The Art of Mexican Cooking
serves 6

Cut the pork into large chunks that are all about the same size (~2-inch cubes worked for me). Heat the lard in a dutch oven or heavy pot over a medium flame.

Sear the meat in batches until the pieces are golden brown on all sides. You will need to do this in batches so that you don’t crowd the pot. Place 5 or 6 pieces in at a time and allow to sit, without stirring, for a few minutes or until a golden crust has formed. With tongs or a spatula, turn the meat to another side to repeat until all surfaces are golden brown. Remove pieces from the pot while you sear subsequent batches. When all the pork is seared, return it all to the pot and add the onion, salt and pepper, sauteing another 5 minutes.

Add the oregano, milk and orange juice and bring to a very low simmer. Cover and cook over low heat until the meat is cooked through and tender, about 20-25 minutes. Remove the lid and raise the heat, cooking until all the juices have been absorbed, about 10 minutes. Remove the pork and allow to rest for about 10 minutes before you chop or shred the pork bits with a fork, removing and discarding any remaining fat.

Serve immediately with corn tortillas and guacamole, or make the quesadillas in the recipe above.

*If you can’t find a butcher who sells freshly-rendered lard, you can cheat this way: Ask the butcher to leave the fat on the pork shoulder that you order. When you’re ready to cook, trim the fat and toss it into the heavy pot over medium heat, letting it melt. When you have about 3 tablespoons, remove what’s leftover (the crispy or tough bits) and you’re ready to make the carnitas.