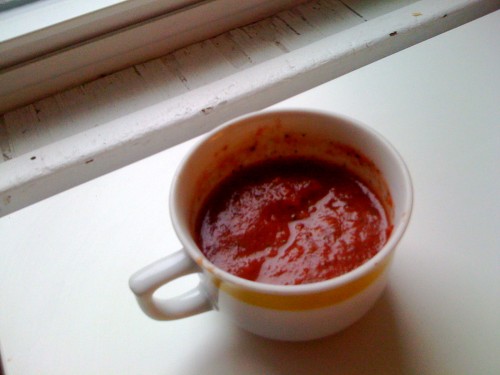 In college, back before the immigration spats and kidnappings, before drug cartels took over the border towns and US Customs required passports for reentry, I annually wandered across to Ciudad Acuña or Matamoros, Mexico, to shop, eat and practice la lengua. (Okay, yes, also for the thrill of drinking a margarita in public before I was 21.) These border towns were not exactly Mexico and they’re not the US either – they’re a strange hybridized place between the two. The fluidity of culture, language and people was apparent every where – and especially in the food. Best example: chips and salsa on the table pre-meal.

In Spanish, salsa literally means sauce. And the gratis Tex-Mex tradition of chips and salsa sounds weird to Mexicans like eating marinara sauce out of a bowl with fried pasta crisps sounds weird to us. But the decidedly un-Mexican practice found its way south through the preference of spoiled tourists and has now become part of the food culture there as well. But here’s the kicker – they do it better.

How does Mexico out-Tex-Mex Texas? For me it all comes down to the chips. Most Tex-Mex establishments roll out their masa paper-thin then deep fry. There’s not enough chip to stand up the the grease, and it’s often too thin and brittle to stand up to the fiery salsa. The tostaditas served on the border, however, are thick and crunchy, cut from fresh corn tortillas and pan-fried or baked. They are stout and full of flavor, a far better vehicle for the salsa that we Americans can eat by the bowlful.

I made the salsa to serve alongside the rich carnitas we ate last week, which needed a spicy, bright counterpart: sweet roasted tomatoes with bright lime and biting habanero. And yes, we also ate it with chips. 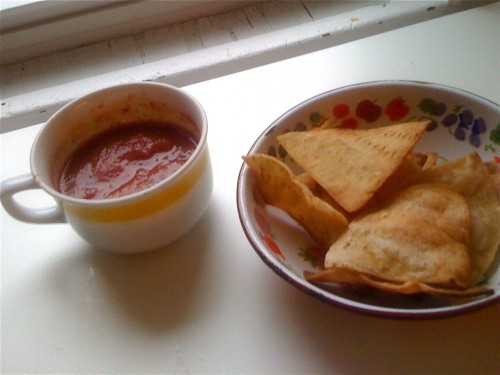 Heat the oven to 400F. Chop the tomatoes in quarters and place in a roasting pan. Do not deseed, and if you’re using canned tomatoes, pour in the juices too. Sprinkle with a little salt and pepper and roast for ~30 minutes, stirring occasionally, until most of the juices have evaporated.

Meanwhile, heat a heavy skillet over a medium-low flame. Toast the habanero pepper in the skillet, turning occasionally until all sides are charred.

Puree the roasted tomatoes with the onion, garlic, cilantro and lime juice. Using gloves, a paper towel or a plastic baggie to protect your skin, remove the stem and seeds from the habanero and discard. Add half the pepper to the roasted tomatoes and remaining ingredients and puree. Thin the salsa out with water – how much water depends on how thick you like your salsa. Taste. If you’d like it hotter, add more of the habanero. Add salt if needed.

For best flavor, make at least one hour before serving so that the flavors become friendly. Store in the fridge for a week or more, although it tends to get spicier over time. It tastes best at room temperature, or even a little warm.

Heat the oven to 400F. Cut corn tortillas into quarters or strips. Toss with a little olive oil and salt in a roasting pan and bake, turning once or twice, until the edges are golden brown and crispy. Serve immediately or store in an airtight container for up to a week. 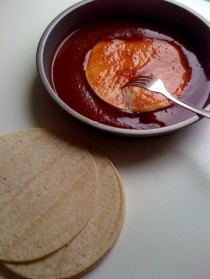